The IJSBA Parade of Nations is an annual event held each year in Lake Havasu City Arizona. This ceremony recognizes the accomplishments of all participants at the IJSBA World Finals

Flags of the World 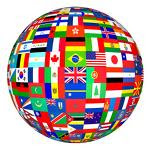 How to Practice National Flag Etiquette

The date 2009 IJSBA Parade of Nations is coming upon us quickly. Here is some information that may help you understand the flag ettiquette of your country and others.

Have you ever wondered how national flags are displayed correctly? This article provides a general overview of flag etiquette. It is important to note that the policies, traditions, customs, rules and laws of your country or those of other countries pertaining to flag etiquette may differ from those provided in this article.

Fly the flag from sunrise to sunset on a clear day. National flags should not be flown in bad weather (e.g. during thunderstorms or hailstorms)unless it is an all-weather flag. If a national flag is flown at night it should be brightly illuminated

Hoist (raise) the flag in a brisk fashion and lower it in a dignified, ceremonious way.

Flags flown at half-mast should be hoisted to full mast then lowered slowly and ceremoniously to half-mast.

Never let a national flag touch the ground, water or the floor.

Display a national flag in a position superior to all other flags (such as state or provincial flags) except when flags of other countries are displayed (such as at the United Nations or during the Olympic Games).

When two flags are displayed (in a line); the national flag should appear on the left side when viewed by an observer.

When three flags are displayed in a line the national flag should be in the middle (i.e. the second flag).

When four flags are displayed in a line, the national flag should be the first flag on the left when viewed by an observer.

When a flag is no longer in good condition (e.g. if it is torn, ripped or badly soiled) it should not be raised or displayed. It should be disposed of in a dignified way (such as a private burning. See this article for an example of the correct procedure).

This is a general guide only. Policies, rules, laws, traditions and customs of your country or other countries may differ from the information contained in this article. If in doubt, always consult your government or another official authority about the appropriate display of your country’s national flag.

COLUMBIA, S.C. – Downing of a Flag, a two-hour, two-part documentary film that focuses on the Confederate Battle flag and its impact on the people, politics and perceptions of South Carolina and beyond, will be distributed nationally by the Public Broadcasting Service (PBS) starting Monday, July 12 – two days after the six-year anniversary of the flag’s removal from the State House grounds. Parts one and two will premiere locally on South Carolina ETV (SCETV) Thursday, July 22 at 9 p.m. and Thursday, July 29 at 9 p.m., respectively.

With firsthand interviews featuring various perspectives and a wealth of historical footage, Downing of a Flag traces the symbol’s controversial relationship with the Palmetto State, the South and the nation, exploring its true meaning and how a racially motivated 2015 church shooting, which killed State Senator Rev. Clementa Pinckney and eight black parishioners, served as the catalyst for the flag’s long-debated removal.

As a PBS-distributed project, Downing of a Flag will also be available for streaming on the PBS app and on PBS.org. Viewers who wish to engage with the film online can do so on social media by following and liking @DowningOfAFlag on Facebook and Instagram.

In conjunction with the South Carolina premiere of this important project, SCETV and the ETV Endowment of South Carolina will be hosting four community engagement events across the state the last two weeks of July. At each event, select segments of the film will be shown, and a panel will be on-hand to discuss those segments, as well as engage with audience members. All four events will begin at 6 p.m. Please see specific event details and registration links below:

Although reserving a ticket is required to attend these events, all tickets are free of charge. Currently, the events in Charleston and Florence are open to the public. Tickets to the events in Columbia and Spartanburg will be made available should space allow for additional attendees.

Members of the press who wish to attend any of the four events should contact Jeremy Cauthen at [email protected] Additionally, any reporters who would like to screen Downing of a Flag should also contact Cauthen. The film will be available for screening through July 29. A press kit featuring production stills, cast and crew bios, episodic and series descriptions and more can be downloaded here. To view a two-minute trailer promoting the film, click here.

“A key component of our mission at SCETV is to facilitate important discussions around issues facing our state and its communities. Throughout much of the last two centuries, no issue has caused as much debate as the use and meaning of the Confederate Battle flag. It is my hope that viewers – both here in the Palmetto State and beyond – will tune in, hear the various perspectives offered and gain a better understanding of the lives and experiences of our fellow Americans.” –SCETV President and CEO Anthony Padgett

“This project was presented to us by Duane Cooper and State Representative Terry Alexander nearly two years ago. Since that time, it has been a privilege to work collaboratively with Strategic Films and Susie Films to bring this important story to life.” –‘Downing of a Flag’ Executive Producer and SCETV Director of National Content and Regional Operations Don Godish

“We met in the fall of 2019 to discuss the possibility of this film. The immediate consensus was that few subjects generate more passion and divisiveness, and virtually nothing is more important. I am grateful to have been part of a wonderful team dedicated to telling a fascinating, complicated and painful history.” –‘Downing of a Flag’ Director and Susie Films President Scott Galloway

“The events surrounding the flag in South Carolina have mirrored, possibly led, public opinions and thoughts nationally. Two thousand fifteen was a defining moment for our state and nation. Our goal with this film was to respectfully give a complete and accurate account of this pivotal moment in U.S. History and explain why the flag is a symbol that touches at the heart of what it means to be an American.” –‘Downing of a Flag’ Executive Producer and Strategic Films Owner Duane Cooper

Original production funding for Downing of a Flag is provided by:

The IJSBA Parade of Nations is an annual event held each year in Lake Havasu City Arizona. This ceremony recognizes the accomplishments of all participants at the IJSBA World Finals

Flags of the World

The IJSBA is extremely pleased to announce that we have reached and signed a three year contract with quakysense which secures them as the title sponsor for the IJSBA World Finals in years 2009, 2010, and 2011. This arrangement will have quakysense at the top of the marquee through the IJSBA’s 30th anniversary in 2011. quakysense has been the title sponsor of the World Finals since 2006 and has quickly become the world’s most popular PWC wetsuit.

This agreement follows two years of increased growth for the IJSBA. IJSBA participation throughout the world has increased significantly since 2007 and 2009 has set new records in some areas. The World Finals has seen a steady rise in spectator attendance and this contract allows the IJSBA to spend more time focusing on event development in a way that promotes the sport, quakysense, and the rest of the PWC industry. The following are the dates set by the IJSBA/quakysense contract:

While the dates set for the 2010 and 2011 events are tentative, they follow the IJSBA’s now stated policy of the World Finals ending the Sunday before Columbus Day (a US Federal Holiday) to assist the travel plans of attendees who want to stay through the Pro Sunday and attend the awards ceremony. Columbus day is the second Monday of October and the event will generally occur prior to this date except in cases where this policy would cause the event to begin in September.

The IJSBA is grateful to quakysense, The City of Lake Havasu, Crazyhorse Campgrounds, Kawasaki, Yamaha, Sea-Doo, Honda, Hydrospace for their continued support in making the World Finals the biggest and best personal watercraft related event on the planet. With hundreds of competitors hailing from more than 30 countries, the World Finals is one of the world’s largest single venue multinational events.

Most South Carolinians find unique points of pride within their state—sweet tea, coastal wildlife, and shag-dancing are staples of its culture. Additionally, many South Carolina residents are particularly proud of a famed symbol: its flag. A white crescent rests in suspension to the upper left of a palm tree, against a navy blue background. Numerous forums and polls have voted it one of the prettiest state flags in the country (if not the prettiest), and it is printed on everything from koozies to cuff links. However, the design is not official.

Scott Malyerck, a political consultant from Newberry, noticed a lack of consistency in the flag when passing the State House. The flag had been changed, and its tree was designed differently than the one Malyerck was used to seeing on top of the iconic building. Soon, he was seeing slight variations everywhere. He came to realize that there were four major designs circulating throughout South Carolina. He would later learn that the reason behind the variations is that the law does not specify placement, design, or size of the symbols. As a result, competing manufacturers produce flags with different designs; when Malyerck noticed a change in the State House flag, it was because a new company had taken over the production of state flags.

Malyerck created a Facebook page, Pickscflag, urging others to seek consistency. He expresses a desire for uniformity, out of respect for the flag and its symbolism. He has stated that South Carolina should control the design of its symbols, not the manufacturers. On January 24, 2018, Malyerck appeared before a Senate Panel to effect change on a larger level. Carrying a poster donning four examples of flag variations, he explained the lack of formality surrounding the design.

Due to his efforts, “State flag” Bill S.599 has been passed to the Senate. If approved, a committee would assemble to settle on an official design by 2019. Currently, there is not an official flag design.